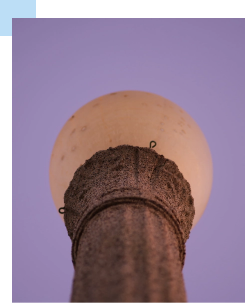 The first era of street lighting began in the 1860s when Los Angeles had fewer than 10,000 residents, concentrated near the Los Angeles Plaza Historic District, the L.A. River, and what is now downtown. In 1867 the Los Angeles Gas Company, a private concern operating under a franchise given by the City and a precursor of today’s Southern California Gas Company, installed gas street lamps around the historic plaza and major thoroughfares, adding over 130 to the cityscape by 1873. These lamps were lit nightly by a traveling lamplighter. The gas was first made from asphalt and later with oil.

In the 1880s, the introduction of direct-current electric arc lighting changed the trajectory of streetlight design -lifting streetlights. So-called Brush lamps using this technology produced such an intensely bright light that their masts rose as high as 150 feet, so as not to blind pedestrians. These lights, referred to as “moonlight towers,” had three lamps, illuminating similarly to a full moon.

In 1905 the City installed over 130 electroliers along Broadway, financed by the Broadway Boulevard Association. This became the norm, private developers or merchants paying the City to install lights to bring illumination and sophistication, creating foot traffic and business. This was also the beginning of high-design streetlights. Hill, Spring, and Main streets soon installed similar lighting and created a nighttime effect that drew wide notice.

A decade later, Mazda C, a gas-filled lamp, emerged as an upgrade over the incandescent bulbs. Providing stronger, more reliable light, the Mazda C helped propel a new version of the electrolier featuring dual upright lamps. It wasn’t until 1911 when the Board of Municipal Art Commissioners was established that Los Angeles began an approval process for new streetlight designs. In 1916, the City became responsible for delivering municipal power to streetlights. Later that year, the City installed streetlights for the first time, lighting Sycamore Park in northeast Los Angeles.

The Bureau of Street Lighting was established in 1925. Its primary task was to provide power and maintenance to streetlights chosen (and funded) by developers from City-approved designs. Los Angeles also began installing basic, utilitarian streetlights (a lamp attached to a timber pole) subsidized by the City’s General Fund.

As Los Angeles quickly grew in the late 1920s, streetlight designs became central to efforts by commercial districts along Wilshire Boulevard and in Westwood Village to distinguish themselves from other sections of Los Angeles. Often, they included wire carrying attachments for the region’s expansive streetcar network.

In 1936, the Hoover Dam’s energy allowed the City to illuminate more territory. That same decade, two significant changes led to the post-World War II designs to come. The first saw upright forms give way to pendants — with teardrop-shaped lamps — attached to horizontal arms extending from the pole. The second change was in the technology, with High-Intensity Discharge (HID) lamps that ignited a gas (mercury vapor). The years following World War II brought the third era of streetlight design, based on advances in HID technology. Some new designs came from MidCentury Modernism of the region’s latest residential architecture, while others were more efficient versions of existing designs.

The most significant milestones came in 2009, when the Bureau of Street Lighting began installing LED (Light Emitting Diode) lamps. Smaller, lighter, and more efficient, LEDs represented a leap forward in lighting technology as great as any in the history of streetlight design in Los Angeles. 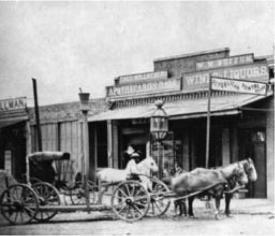 First electric streetlights were installed in the downtown area. Installed on 150-foot tall towers, they illuminated large areas to a level similar to the full moon. Approximately 30 towers were installed from 1882 to 1885. Mayor Toberman turned the system on for the first time. 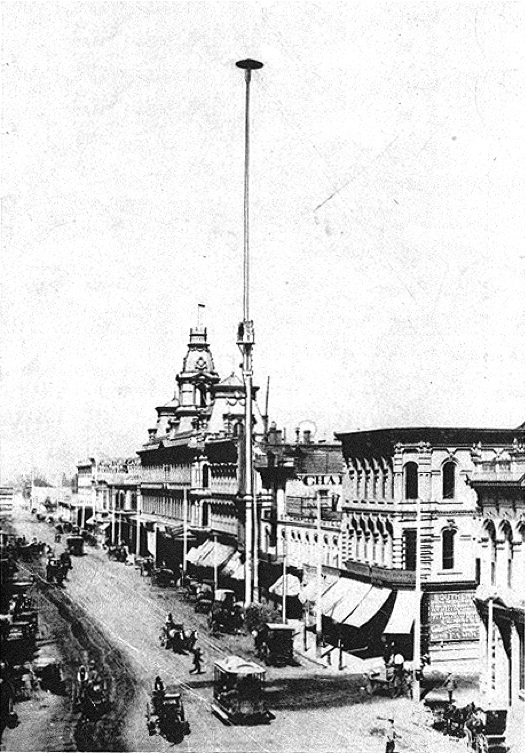 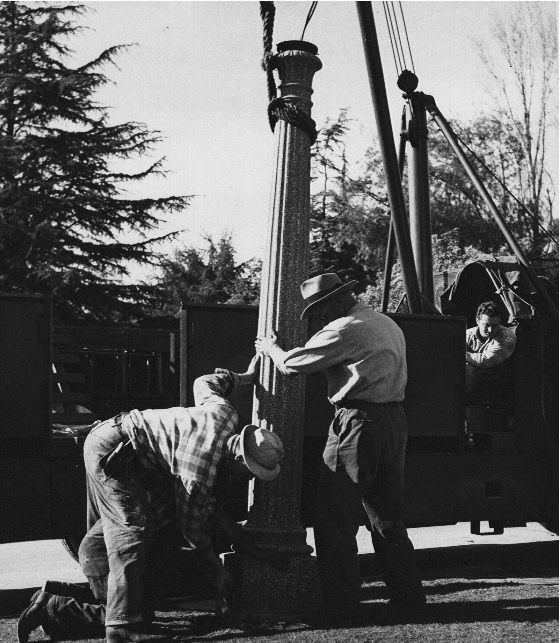 First ornamental street lighting system was installed on Broadway Street. The system consisted of 135 seven-globe, cast-iron poles. Similar style five-globe “cluster” lights were installed throughout Downtown LA, Hollywood Boulevard, Sherman Way in the Valley, and even in the Reseda business area within a few years. 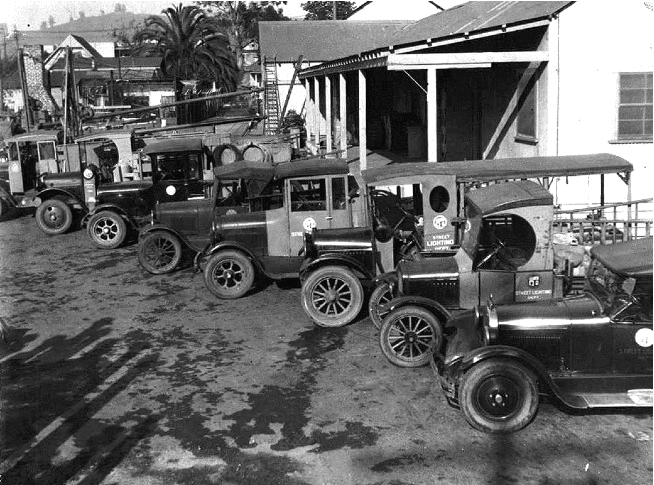 Ornamental street lighting proliferated in Los Angeles - on major streets, bridges and many neighborhoods through the 1920s and 1930s. Ornamental lighting became a significant part of the streetscapes of Los Angeles.

First ornamental street lighting system was installed on Broadway Street. The system consisted of 135 seven-globe, cast-iron poles. Similar style five-globe “cluster” lights were installed throughout Downtown LA, Hollywood Boulevard, Sherman Way in the Valley, and even in the Reseda business area within a few years.

Electricity from Hoover Dam This greatly enhanced the City’s ability to provide lighting throughout. 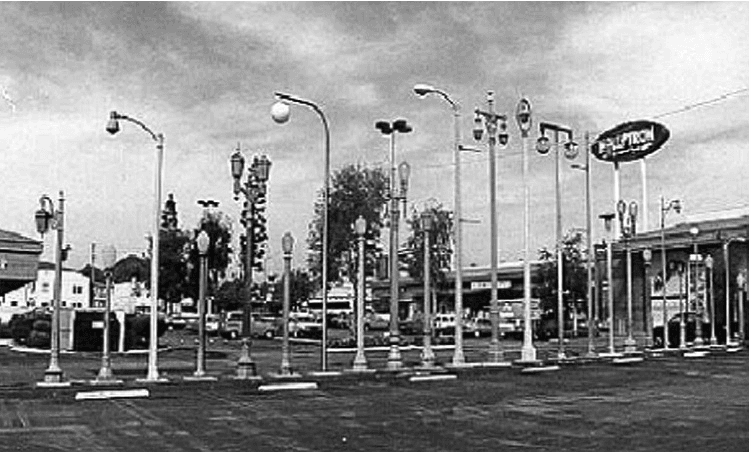 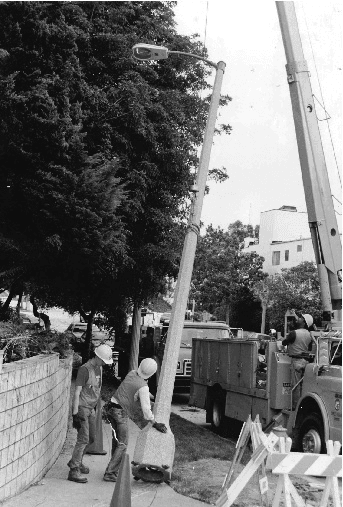 Increase in lighting throughout the city. Some of the factors that led to an increase in lighting included postwar development, a city requirement in 1956 to install lighting whenever a developer wanted to improve property, and the 1965 riots that highlighted the need for streetlights in residential areas. These factors increased streetlights throughout the City from 50,000 in the 1940’s, to 150,000 in the 1970’s, and to about 230,000 today. Currently, about 2/3 of the City streets are now lit.

Changes in lamp technology. The City has progressed from installing incandescent lamps (like what is in your house) which must be replaced every 6 months, to mercury vapor in the 1950’s and 1960’s, to high pressure sodium in the 1970’s which is replaced approximately every 5 years. The energy crises of the 1970’s was a significant motivation to use less energy and save operating costs. With the addition of the induction lighting in 2002, these advances have significantly increased the street lights’ efficiency and effectiveness. 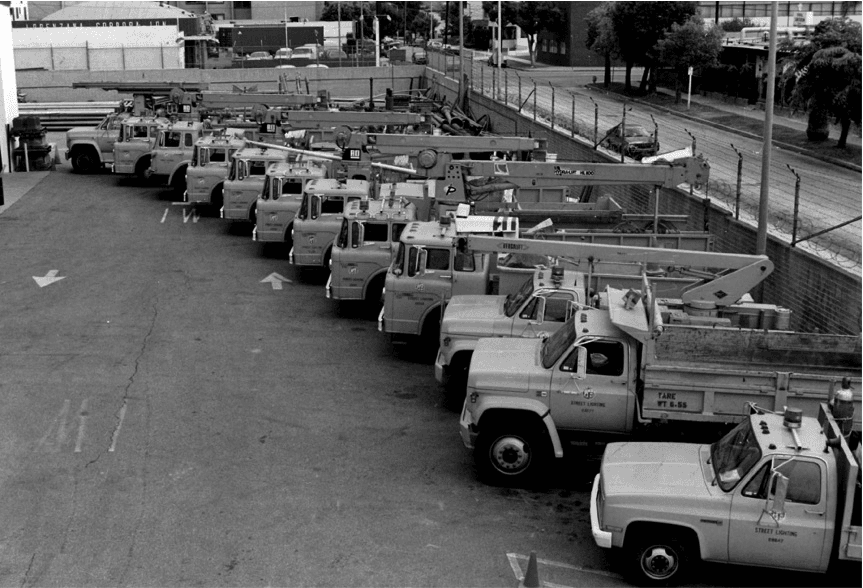 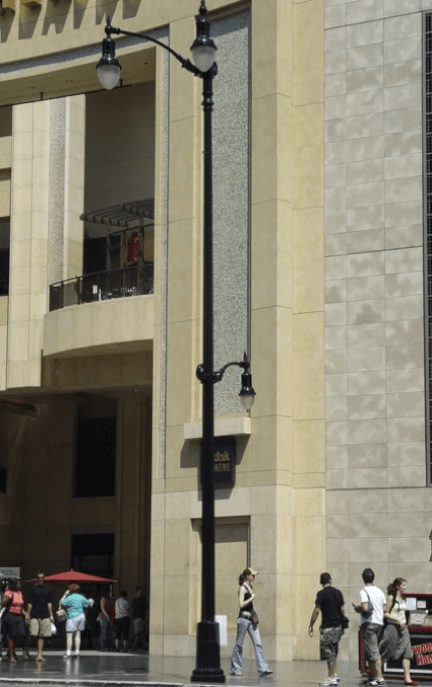 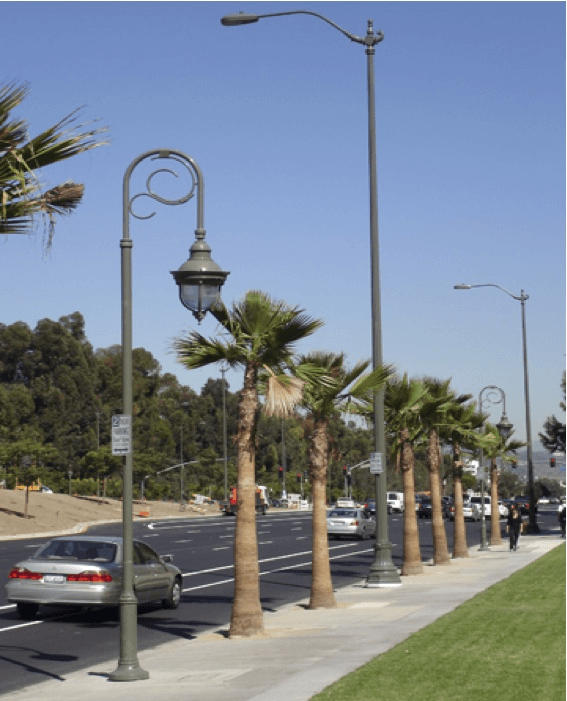 Night crews & street lighting repair. In 2003 the Bureau, for the first time ever, initiated the use of night crews that patrol the entire lighting system. These crews replace many of the lights out even before they are reported. In addition, reports of lights out are received from the City 311 ambassadors instantaneously through the Bureau’s automated Asset Maintenance System. Current technology has also allowed the Bureau to implement the deployment of a wireless web-based, real-time incident reporting system for the light outages. This system automatically detects the light malfunction and reports the location back to the Bureau for repair. Currently the Bureau’s field crews repair approximately 50,000 streetlights every year.

Street lighting maintenance. In 2006 the Bureau of Street Lighting assumed all maintenance work for the streelights in the City. This work was previously divided between the Bureau and the Department of Water and Power. This consolidation greatly increased the efficiency of reparing lights out in the City. 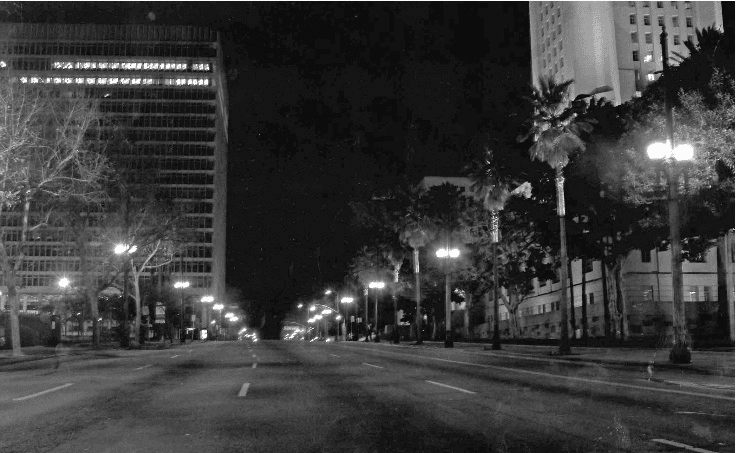 Light emitting diode (LED). The Bureau of Street Lighting has tested and started the deployment of LED streetlights throughout the City of Los Angeles. These lights save approximately 40% to 60% of energy from existing fixtures while providing the same amount of illumination. 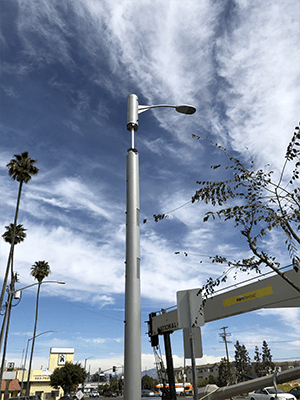 Our LED Program is now connected through modern smart Street Lighting which reduces carbon emissions, with a total annual Energy savings of $10M and 115.85 GWh (gigawatt-hours) in 2020.